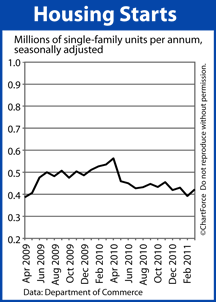 We can’t put too much faith in the data, however, because for the second straight month, the government reports that the data’s margin of error — 15 percent — exceeds its actual measurement.

As written in the footnotes, there’s no “statistical evidence to conclude that the actual change [in Housing Starts] is different from zero.”

In other words, single-family Housing Starts may have dropped up to 7 percent last month, or may have increased by as much as 22 percent. We won’t know for certain until several months from now. As the Census Bureau gathers more data, it will revise its initial monthly findings.

Such adjustments are common. February’s starts were revised higher by 4.5%, for example.

Also included in the Census Bureau’s report is the March 2011 Building Permits tally. As compared to February, permits were higher by 6 percent nationwide. This is a noteworthy development because permits-issued is an excellent forward-predictor for housing.

When permits are issued, 86 percent of them will start construction within 60 days. This means that new home sales and housing stock should follow the Building Permits report trend, but on a 2-month delay.

Permits were strong in all 4 regions last month:

With Building Permits rising, we can infer that the housing market is improving.

Therefore, if you’re currently looking for new construction, consider that the market may be less favorable for buyers 4-6 months from now than it is today. Especially because homebuilders are already projecting higher sales volume.

The better time to buy new construction — relative — may be now.