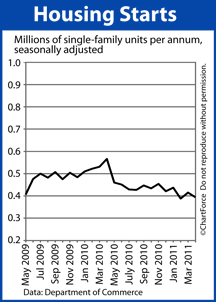 Single-family housing starts dropped by 21,000 units in April on a seasonally-adjusted annual basis.

The Housing Starts report measures the number of homes on which new construction “broke ground”. It’s tracked by the U.S. Department of Commerce which releases new data monthly.

The figures were worse than what Wall Street expected. For just the second time in 2 years, monthly single-family housing starts dropped below 400,000 units. In addition, single-family Building Permits fell in April as well, shedding 2 percent from March.

A building permit is a local government’s approval to start home construction and when permits are down, new construction follows. This is because 93 percent of homes begin construction within 60 days of permit-issuance.

Fewer permits, as a consequence, means fewer new homes. Therefore, if you’re looking at new construction in or around St Paul , April’s numbers may spark a sense of urgency.

Home prices are a function of home supply and demand and, based on the Housing Starts data, supplies appear headed for a fall. Meanwhile, on the other side of the equation, demand should be rising — foot traffic is higher, mortgage rates are lower, and job growth is picking up.

This should lead new home prices higher in time. For now, though, home affordability remains high.

It’s a good time to look at new home construction.