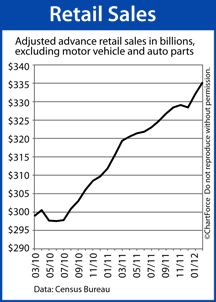 The U.S. economy is expanding, fueled by a renewed consumer optimism and increased consumer spending.

Unfortunately, what’s good for the economy may be bad for St Paul home buyers and mortgage rate shoppers. Home affordability is expected to worsen as the U.S. economy improves.

The connection between Retail Sales and home affordability is indirect, but noteworthy — especially given today’s broader market conditions.

The real estate trade group considers 25% to be the benchmark for home affordability. Today’s payment levels are less than half of that.

The reasons why today’s homes are so affordable are three-fold :

First, in a recovering economy, mortgage rates tend to rise and, throughout 2012 and 2013, home prices are expected do the same. Second, as average earnings increase, it can spur inflation which is bad for mortgage rates, too.

Home affordability is at all-time highs today. But, in part because of February’s Retail Sales data, we should not expect these levels to last. Mortgage rates are higher by 1/4 percent since the Retail Sales data was released — roughly $16 per $100,000 borrowed — and are expected to rise more throughout the spring home purchase season.

Retail Sales are up 6 percent from a year ago.