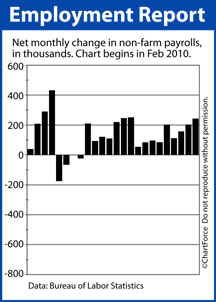 With home affordability at an all-time high, buoyed by the lowest mortgage rates ever, it’s been a terrific time to buy or refinance a home using a mortgage.

The good times may not last, though, so today marks an ideal time to lock a mortgage rate. Friday brings risk. Here’s why.

Since 2010, weak economic conditions have been a primary catalyst for low mortgage rates in Minnesota. Over the last 12 months, though, manufacturing output has been rising, consumer spending has been climbing, and business investment has increasing.

In other words, the economy is improving. However, it’s the jobs market that’s believed to be the economic recovery keystone. When jobs come back, analysts say, so does the economy.

Assuming that’s true, a recovery may already be well underway.

According to the Bureau of Labor Statistics, the U.S. jobs market has grown for 16 straight months now, adding 2.5 million net new jobs along the way. It’s one reason why the February jobs report matters so much to housing.

Rate shoppers would do well to pay attention.

Friday, at 8:30 AM ET, the government will release its Non-Farm Payrolls report for February. Wall Street expects the report to show 210,000 new jobs were created in February, a figure slightly higher than the rolling, 6-month average for job growth. This would be a positive economic indicator.

If the analysts are correct, mortgage rates are likely to rise on the news.

Furthermore, affordability could be harmed by a lot if the number of net new jobs created exceeds the 210,000 tally expected. It’s not a far-fetched scenario. Wall Street’s “whispers” put the actual jobs figure somewhere between 250,000-300,000. A reading lije this would cause mortgage rates to spike and would add money to a prospective monthly mortgage payment.

If the idea of rising mortgage rates makes you nervous, consider taking your nerves out of the equation. Call your loan officer today. Lock your rate ahead of Friday’s Non-Farm Payrolls release.