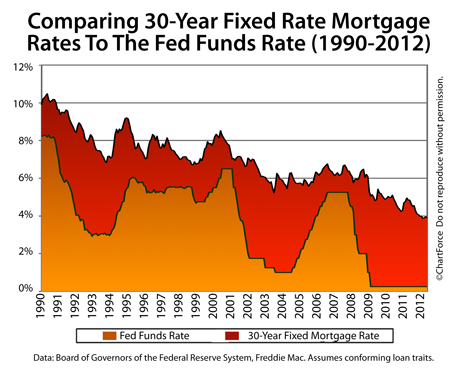 The Federal Open Market Committee begins a 2-day meeting today in the nation’s capitol. It’s the group’s third of 8 scheduled meetings this year. Mortgage rates are expected to change upon the Fed’s adjournment.

Led by Chairman Ben Bernanke, the FOMC is a 12-person, Federal Reserve sub-committee. The FOMC is the group within the Fed which votes on U.S. monetary policy. “Making monetary policy” can mean a lot of things, and the action for which the FOMC is most well-known is its setting of the Fed Funds Funds.

The Fed Funds Rate is the overnight interest rate at which banks borrow money from each other. It’s one of many interest rates set by the Fed.

However, one series of interest rates not set by the Fed is mortgage rates. Instead, mortgage rates are based on the prices of mortgage-backed bonds and bonds are bought and sold on Wall Street.

There is little historical correlation between the Fed Funds Rate and the common, 30-year fixed rate mortgage rate.

They’ve been separated by as much as 5.29 percent at times, and have been as near to each other as 0.52 percent.

Today, that spread is roughly 3.65 percent. It’s expected to change beginning 12:30 PM ET Wednesday. That’s when the FOMC will adjourn from its meeting and release its public statement to the markets.

The FOMC is expected to announce no change in the Fed Funds Rate, holding the benchmark rate within in its current target range of 0.000-0.250%. However, how mortgage rates in and around Minneapolis respond will depend on the verbiage of the FOMC statement.

Any time that mortgage markets are expected to move, a safe play is to stop shopping your rate and start locking it. Today may be one of those times.