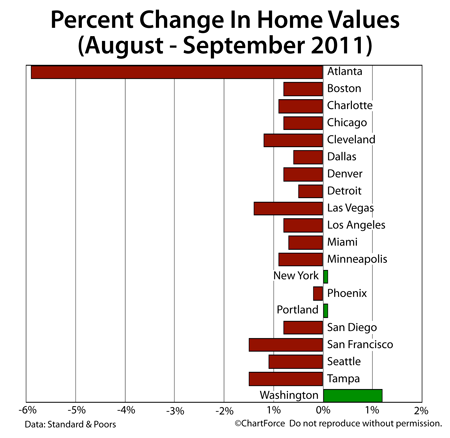 As compared to August, home values fell throughout 17 of the index’s 20 tracked markets, led by Atlanta’s 5.9% drop. On an annual basis, home values have now returned to early-2003 levels.

That said, home buyers and sellers should be cautious when referencing the Case-Shiller Index. The index is a flawed metric and, as such, can lead to improper conclusions about the housing market overall.

The Case-Shiller Index’s first flaw is its most obvious — its limited sample set.

According to Wikipedia, there are more than 3,100 municipalities nationwide. Yet, the Case-Shiller Index includes data from just 20 of them in its findings. These 20 cities account for fewer than 1% of all U.S. cities, and just a small percentage of the overall U.S. population.

The “national figures” aren’t really national, in other words.

Even on a city-by-city basis, the Case-Shiller Index gets it wrong.

By lumping disparate neighborhoods into a single, city-wide result, the index ignores the relative strength of one area at the expense of another. In the aforementioned Atlanta, there are areas that fared much better than September’s -5.9% as cited by Case-Shiller. Some areas fared much worse.

A second flaw in the Case-Shiller Index is it’s methodology for measuring changes in home value. The index only considers “repeat sales” of the same home in its findings, and those homes must be single-family, detached property. Condominiums, multi-family homes, and new construction are not included.

In some cities — Chicago, for example — “excluded” property types can account for a large percentage of total monthly sales.

And, third, the Case-Shiller Index is flawed by “age”.

Because Standard & Poor’s publishes on a 60-day delay, the Case-Shiller Index is reporting on a housing that no longer exists. Sales that closed in September are based on contracts written from June-August –a time-frame that’s 6 months aged.

The best use of the Case-Shiller Index is as an analysis tool for economists and policy-makers interested in the long-term trends of U.S. housing. The index does very little good for every day buyers and sellers, unfortunately.