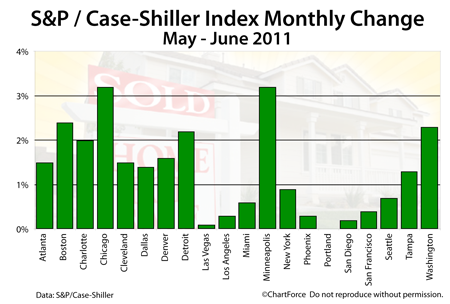 Has housing turned the corner for good?

The June 2011 Case-Shiller Index reading posted strong numbers across the board, with each of the index’s 20 tracked markets showing home price improvement from May.

Some markets — Chicago and Minneapolis — rose as much as 3.2 percent.

The rise in values is nothing about which to get overly excited, however. The Case-Shiller Index is just re-reporting what multiple data sets have already shown about the summer housing market; that it was stronger than the spring market, and that a recovery is underway, but occurring locally, at different rates.

For example, the June 2011 Case-Shiller Index shows the following :

In isolation, these statistics appear promising, but it’s important to remember that the Case-Shiller Index is a backward-looking data set, focusing on just a portion of the national housing economy.

As an illustration, the Case-Shiller Index’s “national report” only includes data from 20 cities nationwide. They’re not the 20 biggest cities, either. Smaller metropolitan areas such as Minneapolis (#48) and Tampa (#51) are included.

In addition, the Case-Shiller index fails to track sales of condominiums, multi-unit homes and new construction. In some markets, including Chicago, these excluded home type can represent a large share of the overall market.

The Case-Shiller Index is a fine data set for policy makers and economists. It describes the broader housing market and shows long-term trends. For the individual home buyer in Minneapolis , however, it’s much less useful. More than “broad data”, you want focused data that’s current and relevant.