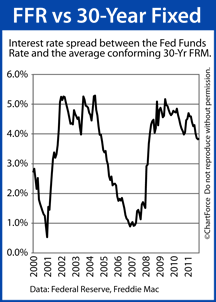 The Federal Open Market Committee begins a scheduled, 2-day meeting today, the seventh of its 8 scheduled meetings this year, and the eighth Fed meeting overall.

The FOMC is a 12-person sub-committee within the Federal Reserve. It’s the group responsible for setting the nation’s monetary policy and is led by Federal Reserve Chairman Ben Bernanke.

The FOMC’s most well-known role is as the steward of the Fed Funds Rate. This is the overnight rate at which U.S. banks borrow money from each other. The Fed Funds Rate is a unique, “banking” interest rate, and should not be confused with consumer interest rates, a category which includes “mortgage rates”.

Mortgage rates are not set by the Federal Reserve.

That said, the FOMC does exert influence on mortgage markets.

After its FOMC meetings, the Federal Reserve issues a press release to the public. In it, the central banker summarizes economic conditions nationwide, highlighting threats to the economy and areas of strength.

When the Federal Reserve’s statement is generally “positive”, mortgage rates tend to rise. This is because a strengthening economy invites investors to assume more risk, spurring equity markets at the expense of all bonds types, including the mortgage-backed kind.

The Fed can also influence mortgage rates via new policy.

The Fed may expand Operation Twist as soon as Wednesday afternoon. It may also take no such steps at all. Unfortunately, there are few clues about what the Federal Reserve may do next, if anything at all. As a result, mortgage rates will be a moving target for the next 36 hours. First, they’ll be volatile before of the Fed’s statement. Then, they’ll be volatile after the Fed’s statement.

Even if the Fed does nothing, mortgage rates will change so your safest play is to lock a mortgage rate ahead of Wednesday’s 2:15 PM ET adjournment.

There too much risk in floating.